A Brief History of Men’s Loungewear

The past year has seen a renaissance of interest in luxury loungewear as people seek a way to pass their pandemic lockdowns in something more inspiring than tracksuits and T-shirts. At New & Lingwood, we set the standard for domestic decadence. Our dressing gowns, pyjamas, slippers, smoking jackets, and smoking caps embody a sumptuous aesthetic of comfort, elegance, and tradition.

To help explain the genre’s history, our own Andrew Yamato, who was recently invited to give a virtual presentation to the National Arts Club members in New York City, has broken down all you need to know for an engaging read:

The classic dressing gown as we know it today traces its origins back to the 17th century, when the Dutch East India company (and later the British East India Company) started importing “banyans” from India. These long, loose garments – usually made of sumptuous fabrics like silk or cashmere – were a comfortable contrast to the tightly fitting suits and constricting cravats fashionable men were wearing at the time, and they were widely adopted as domestic loungewear. Banyans’ flowing lines evoked the classical antiquity so beloved by the Enlightenment, while their sensuality appealed to the romantics and revolutionaries waiting in the wings.

Following the example set by the famous English dandy Beau Brummell, men’s clothing in the early 19th century got darker, simpler, and more sober. This made extravagantly colourful dressing gowns all the more irresistible, and no expense was spared to line and trim them with elaborate silk braid, frogging, and quilted lapels. The quintessential Victorian leisure ensemble was completed with a silk tasseled smoking cap and velvet Albert slippers.

Loungewear has always been adjacent to eveningwear, and when evening tails started being informalized in the latter half of the 19th century with the introduction of the shorter tuxedo, so too did the wool or velvet smoking jacket emerge as a cut-down version of the dressing gown. There were particularly popular garments for gentlemen to keep at their clubs for socializing with their posh peers.

Pyjamas as we know them today were first imported to the west in this era by British merchants from India, where similar two-piece garments of light cotton had been worn since antiquity, and to this day. Extremely comfortable compared to what Europeans were wearing, matching two-piece “pyjamas” were gradually adopted in the west as sleeping clothes. Being a two-piece garment, often made in colourful fabrics and decoratively piped, pyjamas were far more presentable and sophisticated than the traditional long nightshirt or one-piece knit union suit, which were both definitely underwear, and increasingly old-fashioned.

In the early decades of the 20th century, dressing gowns, smoking jackets, slippers and pyjamas all became more widely popular as the growing middle class came to have more leisure to enjoy, and sartorial trappings of the good life became attainable tokens of aspirational success. The First World War knocked a lot of stuffing out of the stratifications and dress codes of the old order, bringing upper and middle class style even closer into line. Classic loungewear reached its peak popularity in the 1930s, when escapist Hollywood movies brought high-class style to the masses and gave many people their first glimpse of how the other half lived and dressed behind closed doors.

After World War II, loungewear was aggressively marketed to a vast and rapidly growing demographic: fathers. Where the iconic image of the Victorian dressing gown wearer had been older and prosperous, and the interwar wearer had been young and louche, the postwar dressing gown was all about appealing to the wholesome comfort and gentle authority of dear old dad.

Every man’s home may have been his castle, but this was the era of oppressive corporate conformity as captured in The Man in The Grey Flannel Suit. These men went to work in suits and ties and hard leather shoes; changing into dressing gowns and slippers when they got home marked a shift -- in their context, personality, and priorities, from worker and professional to husband and father.

The cut of dressing gowns and other leisurewear as we know them today haven’t fundamentally changed much from their Victorian predecessor, but the fabrics they’re made from have changed with fashions over the decades: highly flammable space-age synthetic silks in the 60s, malodorous double-knit polyester in the 70s, and most enduringly, plush terry cloth in the 80s.

Today the classically elegant dressing gown survives as a niche garment for especially stylish men who – like its original wearers – appreciate its comfort and the contrast from their everyday clothing. They’re an opportunity for men to play with brighter colours and bolder patterns in silkier fabrics than they’d feel comfortable wearing outside the home.

For many aficionados, there is the added appeal of dressing gowns being one of the oldest continuously worn garments in sartorial history, but you don’t have to be a traditionalist to appreciate that there is something very elemental and sensual about them. More than with any other garment, you really inhabit the cloth of a dressing gown, luxuriating in the handle and drape of fine silk or cashmere. Once a man appreciates that, he tends to become a lifelong dressing gown wearer. It becomes a daily (maybe twice-daily) pleasure that celebrates the comfort of home.

More than ever, comfort is king – the whole history of modern menswear is really a quest for ever-greater comfort and informality – but there’s no reason that comfort can’t be classic and elegant as well.

Andrew was invited by the venerable National Arts Club in New York City to give their members and guests a virtual presentation from the upstairs lounge of our Upper East Side shop. The presentation concludes with a brief video about New & Lingwood’s state-of-the-art silk weaving and artisanal gown-making in England. We’re pleased to offer the full presentation below. 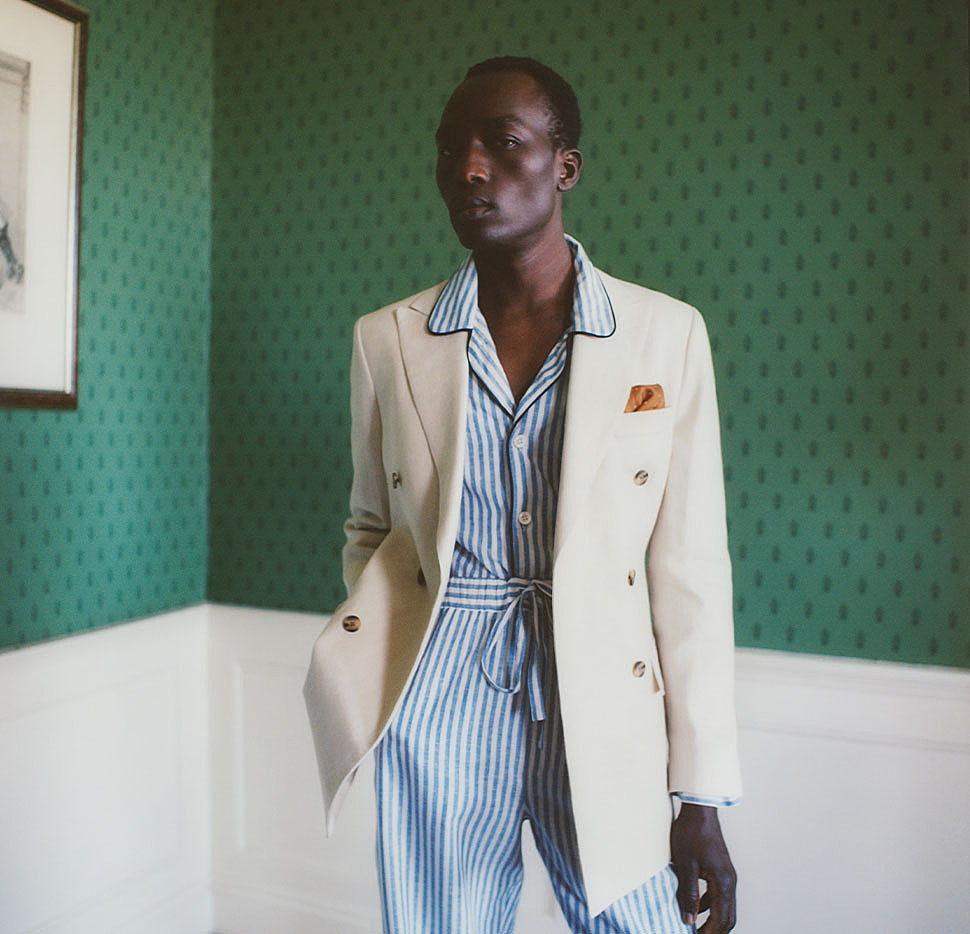